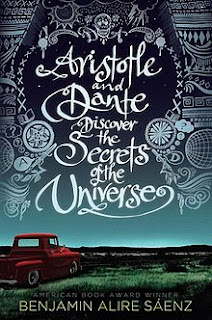 I haven't read that many books as a lot of people like to think. But I've read enough to know that, sometimes, this very weird combination of ink, paper, all of the 26 letters of the English alphabet, and the different punctuation marks can entirely fuck you up, break your heart, scatter your brain, make you weep like a gigantic baby. You still love them, though - after all, if a book has affected you this way, it's impossible for it not to stay with you till the end of your life.

I opened the PDF file on my phone out of complete boredom. Read the first sentence. Then read the second one.
"It's Sunday, you need to go to bed early."
"But Moooooom, can't you see I'm reading!"
My mother gave up on me eventually. You simply don't make a bookworm put their book down. Especially when the book has completely absorbed them to the point of forgetting the surrounding world.

"Aristotle and Dante Discover the Secrets of the Universe" is the story of two Mexican American boys and their beautiful, strong friendship.
Aristotle Mendoza is a quiet 15-year-old guy who has decided to shrink inside himself. He has no friends, everything bores him to death, he is miserable. On one hot summer day, Ari decides to go to the swimming pool, although he can't swim. Who knew the boy who was going to change his life, was going to be there to teach him how to swim.
Ah, Dante - the smart, caring, Dante, Dante who loved poetry, Dante with his great sketches. Dante, Dante, Dante.

As Dante was watching me search the sky through the lens of a telescope, he whispered, “Someday,
I’m going to discover all the secrets of the universe.”
That made me smile. “What are you going to do with all those secrets, Dante?”
“I’ll know what to do with them,” he said. “Maybe change the world.”
I believed him.

Have you ever met someone with whom you just have this natural click; conversations never feel forced, silence is never awkward, and you think you're basically soulmates? Ari and Dante are like that.
Have you ever read a book where you associate with the main character so much, you can predict their future actions and their thougths? Because, swear to God, I am so Ari. And thanks to him, I got to know myself better.

There is something so comforting about this book.
Maybe it's the writing style - there is so much beauty in the short sentences, in the dialogues and the sometimes repetitive lines; Benjamin Alire Saénz made me feel at home all the time - which, to that day, only J. R. R. Tolkien and Ray Bradbury had succeeded at.
Maybe it's the realistic characters. I'm still not over the fact that I will never see any of them. Goddammit, fictional literature.
Maybe it's the plot - or the lack of it, depending on how you look at it. The book is kind of like a journal, and a very messy one, exactly like the mind of a teenager.