"Simon vs the Homo Sapiens Agenda" by Becky Albertalli

What makes me really sad is that there are no more than three people who follow my blog and would get all the references I can make about this book. So I won't make any, I promise. 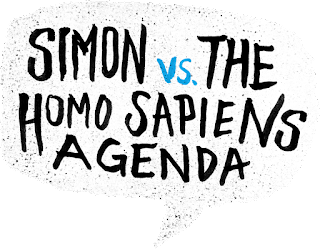 After Aristotle and Dante Discover the Secrets of the Universe, I've been a sucker for LGBT literature, diverse cast of characters, and contemporary romance making me scream AWWWW. I reached out to Simon vs the Homo Sapiens Agenda, as it was the most appealing one of all of the twelve books that had arrived.

I say this about a lot of books lately, but, again - I love it when I can relate to the main character. Or better - when the main character is like my lost soulmate (but is actually only fictional and has never existed, ha! Ha...)

Simon Spier is a confused, very-in-love, and huge-Harry-Potter-fan 16-year-old boy.
Since August, he has been exchanging emails with the very cute Blue who goes to the same school as him. The mystery comes from neither of them knowing who the other person is. They find it kind of appealing and think it makes their friendship... spicier.
But you all know how love can completely change you. Your head is so lost in the clouds that you forget to do all sorts of thinks, like logging off of your e-mail and letting the wrong person, or Martin Addison, in Simon's case, see the wrong emails. Martin tries to blackmail him into telling the entire school Simon is gay unless he helps him talk to Abby, his best friend.

Now life has gotten freaking complicated. There is a romance involved, there's this weird part of life where you have to figure out who you are or might be, and you're looking for something even though you don't know what exactly. And everything seems to be a holy freaking huge awesome deal.


“But I'm tired of coming out. All I ever do is come out. I try not to change, but I keep changing, in all these tiny ways. I get a girlfriend. I have a beer. And every freaking time, I have to reintroduce myself to the universe all over again.”

I loved the diversity in the book - not only was it an LGBT novel, but it had characters of color and there were different religions represented (both within the main characters, guys!!!), which made me really happy, as there aren't enough as diverse books published as this one.
I also enjoyed the realism in this book a lot - it's more than devastating that we still live in a world full of hatred, although it's the 21st century where we're supposed to be open-minded and supportive. We see how LGBTQIA+ folks feel the need to stay in the closet, and even for some of their best friends, because no one knows how they will be seen, and it's sad that this isn't seen only in fiction.
On a lighter note, I want to say that the romance in this novel will make the biggest cynic ever smile from ear to ear and giggle silently. Despite the love scenes only being in the last thirty pages or so, they're as sweet as the Oreo milk shake Simon so much loves. And, can we just point out how perfect Simon's music taste is?!

For me, the biggest point of the book was stepping out of your comfort zone - at some point, ironically, it stops being comfortable at all. Our teenage years is when we change the most and YA characters have helped me a numerous times to find out things about me I hadn't yet discovered. So let's all cherish this book together and thank Becky Albertralli for creating a cute romantic book that is simultaneously discussing serious topics in today's society.
Posted by Unknown at 9:00:00 AM No comments: Links to this post