Percy Jackson and the Heroes of Olympus: The Lost Hero by Rick Riordan

A year and a half had passed since I had last read anything by Rick Riordan. I was fascinated by the world he had created when I read the first PJ series in 2014 - Greek mythology mixed with the 21-st century; gods talking on mobile phones, Poseidon wearing beach shorts. You know, things that every teen would find hilarious. But no matter how much I had enjoyed The Olympians, I couldn't find myself to pick up Heroes of Olympus.
Until now. 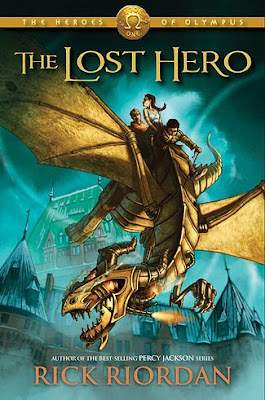 Unlike in Rick's first series, there's more than one point of view here. Plus, it would've been hard for Percy to relate the story, when he isn't the main character in the novel - or when he isn't at Camp Half-Blood at all anymore. He has been gone for eight months and the entire camp has been looking for him everywhere. Instead of Percy, they are introduced to three new demigods... And one of them doesn't really fit in. He doesn't even belong to this camp.

Jason wakes up in a school bus on a trip to Grand Canyon, next to, apparently, his friends Leo Valdez and Piper McLean (who might be his girlfriend. Who knows? Definitely not Jason.) He doesn't remember who he is. Or who they are.
After the new trio has been taken to Camp and claimed by their godly parents, a prophecy opens to them:

Seven half-bloods shall answer the call,
To storm or fire the world must fall.
An oath to keep with a final breath,
And foes bear arms to the Doors of Death.

The three demigods have a short time to free a god, which definitely isn't an easy task when one of the mightiest goddesses has turned against all heroes. Moreover, she has gained a lot of followers who will try to trip the gang during their journey.

You see, I had been putting this book off for a long time, thinking that I was over my Percy Jackson obsession. Boy, was I wrong.
While The Olympians is more middle-grade-ish and predictable, Heroes of Olympus is darker and much more twisted. Monsters seem to have gotten stronger and more difficult to beat - but so have the characters. Life (and gods) throw an, at first sight impossible, quest at Jason, Piper, and Leo, testing their willpower and strength.
Not only has Rick's writing bettered, but so has his sense of humor - I found myself laughing out loud not only once or twice. Their utter positivity is contagious. Even in the darkest of times, the trio manages to find the light and crack a joke or two.
This book's biggest plus is, in my opinion, the characters. None of them has it easy. Leo is left completely alone in the world, Piper is covering the truth about her only family left, and Jason doesn't remember the first thing about his life. Leo's story touched me the most and he was definitely my favorite character in this book.
Another aspect of their personaliities that is not to be missed, is the fact that there are PoC characters - Leo is a Latino character, and Piper is Native American. It might not be huge or groundbreaking for many people, but a lot of popular authors create only cishet white able-bodied neurotypical characters, and these here aren't neurotypical either! But anyone invested in the PJ series knows that the majority of demigods have either ADHD, dyslexia, or both.

Although The Lost Hero lacked Persassy - excuse me, Percy -, it's still phenomenal and mind-blowing. After all, who doesn't love a good page-turner with metal dragons and elements from two different mythologies interweaving?!
Definitely a solid 5.
Posted by sluncheva at 8:00:00 AM